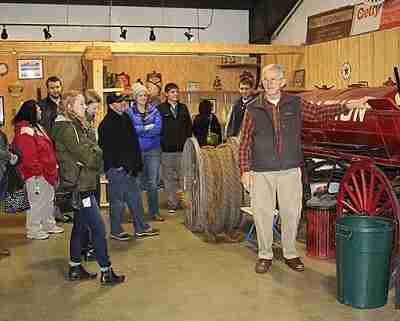 The newest class of Leadership Crawford County recently had the opportunity to learn about Illinois and Crawford County’s oil history at the Oblong Oil Field Museum.

The visit included a personalized tour by longtime oil man John Larrabee of Larrabee OilCo., Oblong. Larrabee has been a longtime promoter and contributor to the museum. Also speaking to the group were Seth Whitehead and Sam Barbee.

Whitehead is the new executive director of the Illinois Petroleum Resources Board. Whitehead comes to the IPRB after a four-and-a-half-year stint at FTI Consulting, where he was most recently Team Lead of Energy in Depth, a research and education campaign focused on media outreach with regard to shale development across the country.

A 2003 graduate of Southern Illinois University-Carbondale and native of Fayette County, Whitehead’s duties at the IPRB will include serving as the primary media contact for the upstream Illinois oil industry.

The IPRB was formed in 1998 to provide public awareness/education programs and to clean up/restore abandoned oilfield sites throughout the state. Funding for IPRB programs comes from voluntary contributions of oil and natural gas producers and royalty owners in Illinois.

Larrabee pointed out that the IPRB played a big part in loaning money for the construction of the Oil Field Museum buildings.